Hello all my name is Nazneen Sabir Muhammad, and I am from UAE and recently I become the proudest daughter for my mother by being the living liver donor for her. 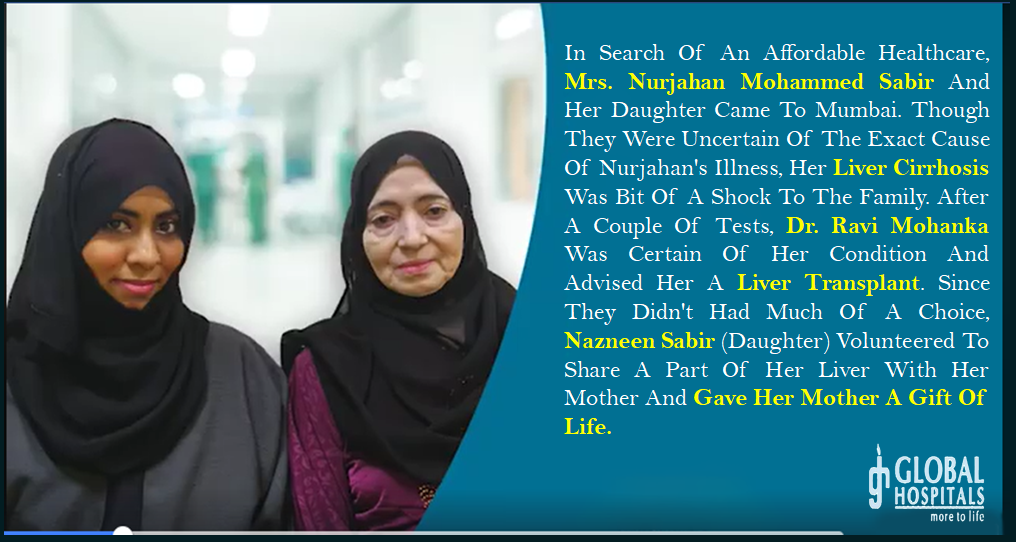 My mother Nurjahan Mohammad Sabir(42 years) was suffering from a lot from her leg pain, which we thought was normal but after some time she started getting fatigued, discoloration in the skin and eyes was seen, she even had the weight loss that can be examined easily. My father and I took her to a nearby hospital, and the doctor asked to perform the tests. Immediately we performed all the tests told by a doctor, but nothing was found. After undergoing a lot of medication still, no improvement was seen. My mother was experiencing a lot of stress and pain, so we decided to show her to another doctor, she was again undergoing a lot of tests and after a test that made her annoying and this lasted for 2 years with no solution.

I interacted with my mother, and she told me that it was becoming painful day by day. So we thought of having the second opinion with the service provider that made us travel to India. We reached Global Hospital, Parel, Mumbai. Where we initially met Dr. Mohanka and he suggested to have some tests. Dr. Mohanka after examining all the reports and learning about her sickness found Cirrhosis which led her to all the symptoms. Dr. Mohanka told us that, “It is a time now you have to take a quick decision about the donor. She was in critical condition with an urgent  need of a liver transplant.” 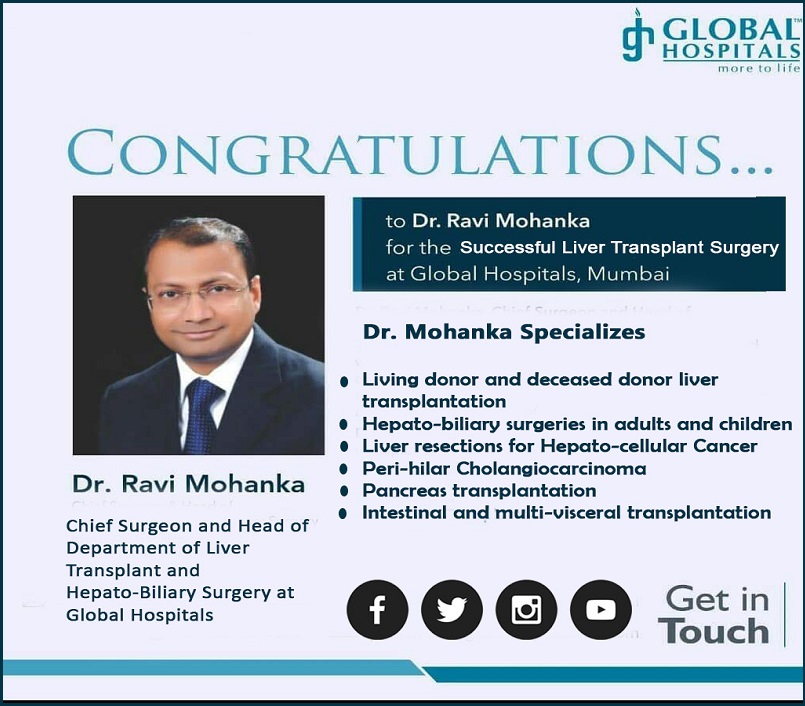 I never thought of donating organs ever, but when it came to my mother I thought of taking the initiative by being her living donor.  I was determined to help her as she did everything for me. Hence I decided that I would donate a part of my liver to her. Doctors performed all the tests which made them sure that I can be the donor. It was a scary moment when they took me to the operation theatre, but I dozed off because of anesthesia. And I got up there I saw my mother who had her liver transplant. It took 5-6 hours for the successful operation.

After the surgery, I felt much better and even my mom felt healthier, she is better than before. I am so happy the doctors were careful and so good. Dr. Mohanka made us understand the importance of her liver transplant and it had changed her life. All the team of Global Hospital was nice and co-operative, everything was fine with my mom and me. I am thankful to the team for making my mother have a new life.

The feedback which I like to give Global Hospital, Parel, Mumbai is, the ICU members were really too good. They were very supportive, very co-operative. They treated us very well. Dr. Ravi Mohanka with good co-operation among the whole team and the work that they have delivered to us was very appreciable and I thank each and every team member around they made us feel homely. There care and services mattered us a lot.