The Saudi Arabian couple with a beautiful daughter named Emma had successful treatment of liver transplant in India. For this couple, it was difficult from Emma’s birth, because she was suffering from liver problems after her birth itself. Her parents used to take her to different hospitals for treatments but were not able to find a better solution for it. So local doctors suggested them to visit here once and assured them that they will definitely get results.

In a rare and successful circumstance, doctor’s carried out a liver transplant of Saudi Arabia’s one-year-old Emma. The operation was performed at Artemis hospital in Gurugram, India. The transplant was performed using a bovine jugular vein of a cow, in this case, to provide blood circulation to the new liver. Such type of Liver Transplant in India was performed for the first time which was going to carry out by the doctors in the one-year-old Arabian girl. 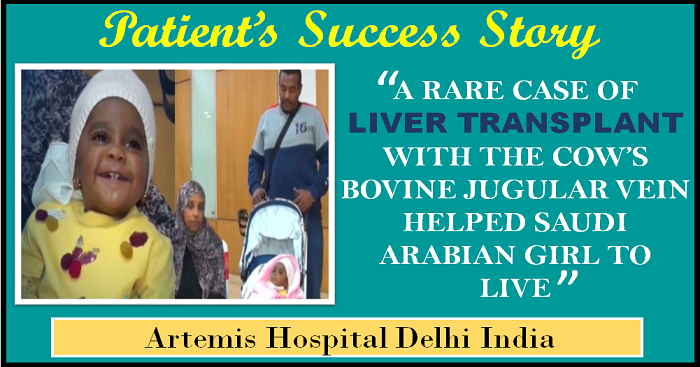 Emma was 8 months old and her weight was 4.5 kg. The senior consultant, of Artemis Hospital, said, “When Emma arrived here, she was weak because of her liver problem and she was suffering from Biliary Atresia. Her same operation was carried out in Saudi Arabia, which was not successful and then referred here by local doctors. Doctors suggested them to visit India for Biliary Atresia Treatment in India. After visiting here, for some time, the doctors managed her illness with medications. Doctors found out the way for her treatment that was, “We had to consider this type of transplant because in India there is no donation of cadaver vein available. The vein of Emma was very small and no vein of the cadaver was available here. Later, they told us that bovine jugular vein (animal vein) would be used in the transplant.”

The doctor says that “the liver transplant in Delhi-NCR was performed on the baby for the first time. This was for the first time in India this kind of surgery was taking place. This is a very rare case as this is the World’s first Liver Transplant Treatment in which the veins of a cow were used to transfer blood to the new liver. This was an alternative solution for that little girl.” He further continued, “This case is so unusual because, in this transplant, 1/8th of the liver was used together with the cow’s bovine jugular vein to replace the patient’s vein”. Biliary Atresia Treatment in India was equally difficult for the doctors who treated her but still they manage to do the successful surgery of Emma. Doctors initially told parents that this transplant surgery is going to be ‘extremely rare’.

Parents were thankful to the doctors and hospital staff in India. They were satisfied with the doctors and their results. The baby was successfully treated and she is out of danger.